I signed my contract for publication with The Wild Rose Press.  When I got the first letter from Susan, asking for revisions (it seems like months ago), I didn’t quite know what to expect, but thought that she was the editor, she’d know more than I might about the line I was targeting at TWRP.  So, I did the revisions, resubmitted, and waited…

I had to admit to myself, this was further than I’d ever gotten into the process.  I’d had complete manuscripts requested, and then the very nice letters, praising my ability to write, but the story just wasn’t for that house.  Or, the letters that just said, “Thanks for sending the whole MS, but it’s not ready.”

I have to admit, I wasn’t expecting to be offered a contract.  And, then I got another request for one more change.  Okay, this WAS a whole other step in the path to publication that I hadn’t taken before.  So, I did the requested revisions, resent the MS, and waited…

And, then came the e-mail…”I would like to offer you a contract…”

I don’t think I stopped dancing around the house for three days.  I kept pinching myself.  I kept asking my better half (and before anyone jumps on me for that, Ken is my better half because he makes me better) if it was real and to please re-read the e-mail, because maybe I hadn’t read it right.

After signing the contract, I received all kinds of goodies from TWRP, tips on how to market me and my MS, things I needed to do for the artists who will be creating my cover art, suggestions for joining certain writers’ loops (not to mention the one mandatory loop that is used for communication between signed authors and the house–which actually makes a lot of sense and would have to save immense amounts of time, effort, and money).  One of those tips was that I needed to create a blog. 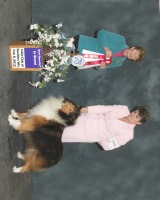 So, I’ve taken the plunge.  I now have a blog.  As much time as I spend online lately, blogging shouldn’t be too much of an issue–other than when I’m gone for dog shows.  Oh, did I forget to mention that another part of my life is totally owned, ruled, and dominated by a bunch of “fur kids” who also happen to be collies?

So, sit back, read the musings.  I don’t and won’t guarantee that the blog will always have a relation to the writing life, but, I don’t think it will be that boring.